Also, in accordance with the release plan described in D5.1, this document describes the release of the first version of the MegaM@Rt Integrated Framework. It is the MegaM@Rt2 Eclipse IDE, which is released to the end-users in two different flavors:

The following subsections provide additional details about the implementation of both artifacts.

The MegaM@Rt2 Eclipse update site enables end-users to install into their own Eclipse instances individual (or the complete set of) MegaM@Rt2 tools integrated within the common MegaM@Rt2 Eclipse IDE. This IDE is based on the Eclipse Modeling 2018-09 version, which can be downloaded independently from: https://www.eclipse.org/downloads/packages/release/2018-09/r

The following MegaM@Rt2 tools have been integrated within the update site:

Other MegaM@Rt2 tools are still in the process of integration and should be added in the next release:

These tools require to be upgraded to Eclipse Modeling 2019-08. The development team is analyzing the feasibility and cost of such an upgrade.

The Eclipse-based tools whose distribution license is commercial will neither be integrated within this update site nor delivered within the MegaM@Rt2 Eclipse IDE bundle, since they cannot be freely distributed:

There is another Eclipse-based tool with a restricted distribution license, namely S3D. The development team is currently evaluating the feasibility of a joint package and delivery within the MegaM@Rt2 Eclipse IDE (update site, bundle).

This site has been implemented as an Eclipse site project using as target the Eclipse Modelling 2018-09 and other third party required dependencies, whose update sites have been defined in the Eclipse platform target defined at: https://github.com/megamart2/integration/tree/master/eu.megamart2.platform.target

Getting started with MegaM@Rt update site

Step 1: Use an existing instance of Eclipse Modeling 2018-09 or download/unzip it from: https://www.eclipse.org/downloads/packages/release/2018-09/r

Step 2: Register the following software sites within the Eclipse IDE:

These sites are required to install the required third party dependencies of the MegaM@Rt2 Eclipse IDE.

To register each one of these software sites, proceed several times as follows (see Figure 5): 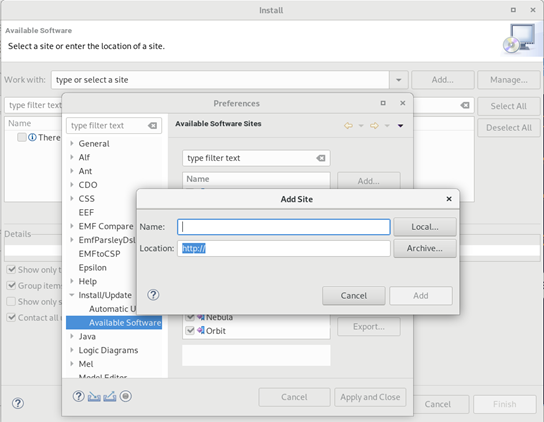 Once this process is completed, the lists of available software sites should look like what is shown in Figure 6. 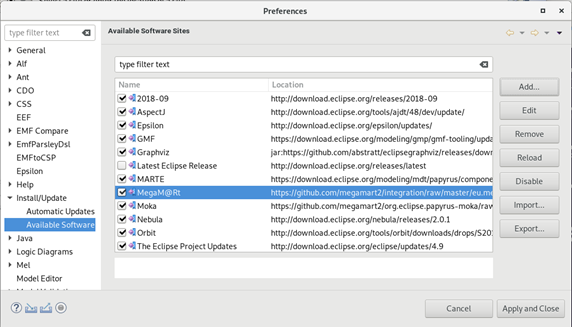 Step 4: Install MegaM@Rt2 tools, using the MegaM@Rt2 software site. You can either install individual tools or the complete set, on demand (see Figure 7).

In other to install the dependencies and the MegaM@Rt2 tools, follow the procedure described in what comes next: 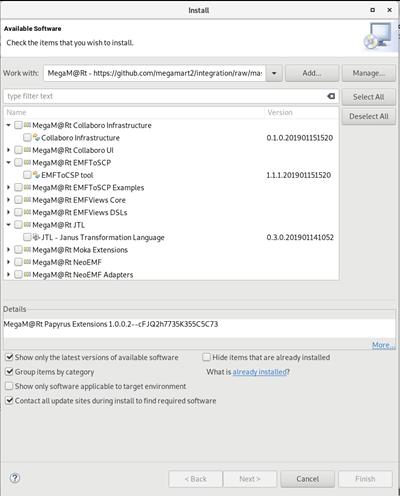 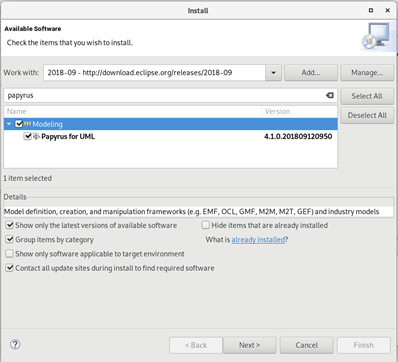 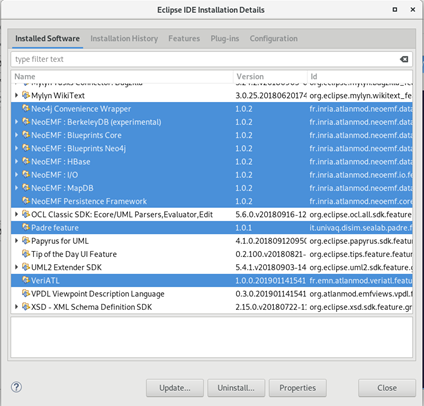 These IDE bundles have been created by following the installation procedure described in the previous subsection.