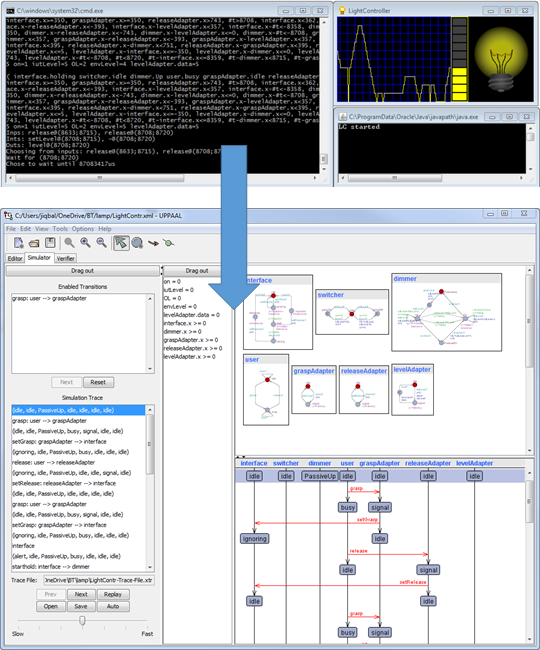 Online model-based testing is an important method for validation of software systems, which checks on the fly the conformance between the behavioral specification of a system and its implementation. In contrast to generating and running offline tests,  online testing addresses better the non-determinism of the system and at the same time, it provides the possibility to execute tests sessions over longer periods of time. The latter in many cases allows discovering faults that cannot be usually identified with offline tests. However, one challenge in online testing is that it can produce test logs with a large number of events that are difficult to debug and analyze in order to identify the source of the error.

UPPAAL Tron is a popular tool for online model-based conformance testing of real-time systems which uses models created in the UPPAAL model-checker for online test generation. UPPAAL features a simulator which allows one to simulate, visualize, and debug the specification of the system.

In a recently published article,  we provide a tool-supported approach which analyzes online testing logs generated by UPPAAL Tron and converts them into simulation traces that can be executed in the UPPAAL simulator. The approach proved beneficial for analyzing test execution in a graphical simulation environment in a step-by-step manner. The evaluation of the implementation of the approach shows that it has the potential to satisfy the needs of industrial level testing.

The paper has been published in the Proceedings of the Fifth European Conference on the Engineering of Computer-Based Systems and presented at the ECBS conference in Larnaca, Cyprus on August 31, 2017. The pdf of the article can be downloaded from here.